It has become very popular in the last several years to think of free and open source as a community forward activity, indeed the modern approach is to try and form a community or foundation first and do code second. There is also much talk about maintainer burn out and community exploitation. However, the same people who talk about this still paraphrase the most famous quote from the Cathedral and the Bazaar "Scratching your own itch". They forget this is your own itch not everyone else's because Open Source begins as a selfish activity. The fact that communities do form around a load of selfish competing individuals is actually a testament to the unacknowledged power of open source to co-opt the selfish instinct and make it synergistic to some communal good.

This talk will explore the selfish origins of free and open source and dissect the co-option power it has to form broad and deep communities from what are apparently simple transactional engagements. We'll also explain how some of the more recent community failures have been engendered by the concentration on long term community to the detriment of enabling purely transactional mechanics by which initially selfish contributors come to the project.

The origins of selfish contributions, while called out in the founding canons of the open source and free software movements, were initially not very well recognized until the first open source projects (and here the author will use the example he's familiar with: the Linux Kernel) tried to engage successfully with companies trying to utilize the projects for their own ends. We became adept at explaining why forking is bad and how your cost structure will rise exponentially if you do it and how the cheapest method of achieving your business goals is in fact to work with the existing community on whatever feature the company was trying to add as part of its business plan. In fact, those of use who did company engagement because transactional sales people offering a corporation the achievements of business goals in exchange for some unexpected community engagement.

Nowadays, all companies have drunk the open source coolaid and all pledge their loyalty to further the interests of the community and this previous learning is all but forgotten in the third and fourth waves of open source. However, at their hearts, corporations are still the same business goal focussed transactional entities we had to deal with in the early days of open source and an understanding of how to co-opt their transactional nature would go a long way to assisting new open source developers in their quest to form communities.

This talk will begin with some history of the Linux kernel's corporate engagement, explore and explain some of the processes within open source development that lead to the conversion of transactionalism into long term community synergy (the truly astounding ability of open source to co-opt selfishness) and then give a few examples of how serving the community rather than enabling transactionalism can give rise to burn out and apparent exploitation. In conclusion we'll give some simple rules to enable this co-opting and suggest how some of the competing interests of the ethical source and social justice movements might likewise be co-opted. 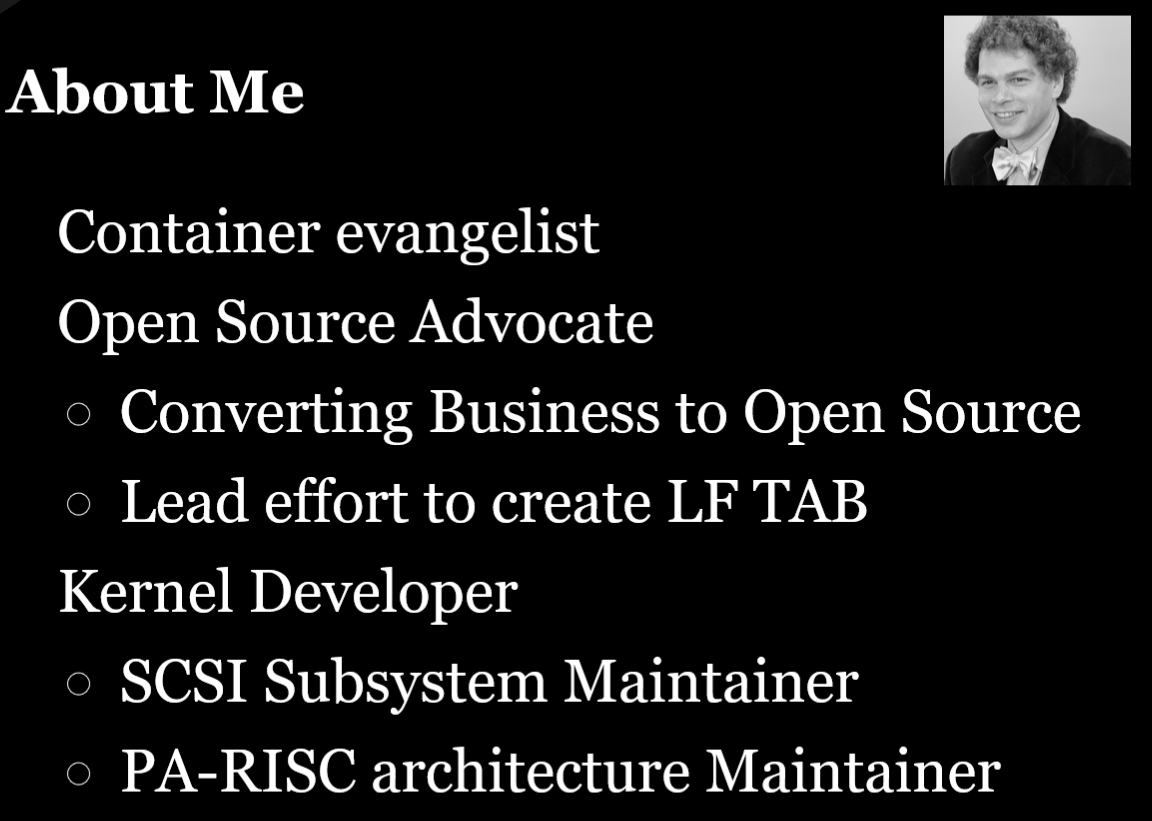 Grav was with by Trilby Media.